Born an April fool in sub-arctic Canada, croc E moses is now somewhat global African, having lived over half his life in Swaziland and South Africa. This temperature graduate is now finally poetically licensed. Clever fooligan has made all the right mistakes and has self-realised his irrelevance.

He flirted with rock stardom as a drummer and once upon a time attempted art school and a decade later an MBA. Amongst other expeditions, he has applied himself as a graphic designer, candle shop manager, nude model, indie artist, waiter and pop hermit (part monk, park monkey, mostly moses!) - In other words a fully embodied anthropological experiment!

Mr. Moses has attempted integrating his infinite personality and has even taken it to the stage! He fancies himself a bit of a nectar connector…talking songist…rhythm driven wordsmith…wordle doodle ist…heart headed hartist at heart… borderline magician …dubious flowtician …dinkum nincompoop…and once upon another time he even found himself to be a poet on strike. Well, quite simply he’s brilliant and yes it’s fooking irrelevant. Stay tuned to find out how he was bestowed with such a rambunctious name!

For the last ten years croc E moses has been planting word seed. With an activated sense of scooberty, this poem ranger has been inciting the in sight. His works are serious, sensitive, deep, sometimes profound, equally flippant and possibly humorous. He takes many risks in his content and imagination. He draws upon exposure to extremes. His wordstrings are tasty tangents - His accent, soothing moon root liquorice, sub-dub dollop delicious…treating you to a little bit of everything you like. His performance is mysterious dragonfly capoeira!

Surprisingly and unsurprisingly he has performed at festivals, conferences, schools, universities, open mics, fund raisers, dinner parties, exhibition openings, a rehab centre, Pollsmoor prison, a casino, a catwalk and solo gigs mainly in South Africa, but also as far as Swaziland, Mozambique and different parts of the world. Highlights include: 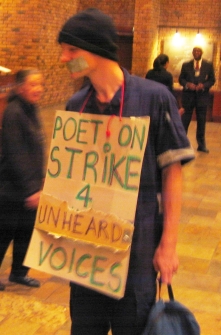